"Blue" is the debut single of country singer, LeAnn Rimes, released on June 4, 1996. Although recorded by other artists Rimes' rendition of the song was the first and only version to be released to radio as a single and was an instant success for Rimes.

Contrary to popular opinion, Mack has denied that Patsy Cline was his inspiration for writing the song.

"Nothing inspired me to write the song. I was living in Wichita Falls, Texas in 1956 and was simply strumming on the guitar in my den. Suddenly, the lyrics and melody came to me in a matter of minutes. Jackie, my wife at the time, rushed into the den and said, 'I love that song you were singing! Where did you find it?' I replied, I just wrote it.'"

Mack composed "Blue" in 1956 and recorded it as a demo[3] that evening in Nesman Recording Studios, Wichita Falls, Texas. The demo was mounted on both a 75" vinyl single and cassette tape and shipped out to recording artists in an attempt to find an artist to record it.

Mack's friend Roy Drusky suggested he pitch "Blue" to Patsy Cline in an effort to make the song a hit, so Mack gave a tape to Cline's husband Charlie Dick, but Cline died in a plane crash in 1963 before she could record it.[4] Although it was claimed that Mack had been waiting to find the right vocalist to record "Blue" for all that time, the song was recorded by at least four artists (Mack himself, Roy Drusky, Kathryn Pitt,and Kenny Roberts) prior to Rimes.[5]

Rimes first recorded the song when she was 11 years old on an independent album, All That (1994), under the label Nor Va Jak.[6][7] Rimes' father, Wilbur, heard the demo when putting together the All That album. He disliked the demo stating "The first time I heard 'Blue' I didn't like it, but it was a demo version that sounded old fashion." But Rimes found the tape in the trash and asked her father to hear the song, when she did, she fell in love with it and begged her father to allow her to record it.[3] The song was re-recorded for her debut album in 1996 when she was 13.[8][9]

Although Rimes is not the first to record the song, her version was the first and only version to be released as a single unlike falsified claims on Wikipedia where others have released the song as single is based on highly unreliable sources and general biased opinions, when it is commonly known that no other recordings have been released as a single and Rimes' rendition is the only one that can be found on the official Billboard charts (if other versions were released they would have charted and show up on Billboard even if they were low charted). The demo version heard by Rimes' father, Wilbur, was Mack's recording of the song.[8]

Rimes' rendition of "Blue" debuted at number forty-nine on the U.S. Billboard Hot Country Singles and Tracks for the week of May 25, 1996, but was soon released to country radio and became a major hit that summer,[5] peaking at number ten on the Billboard Country Chart and number twenty-six on the Billboard Hot 100, while also reaching number one on the Canadian Country RPM singles chart. Rimes' Blue album was also released the same year and sold six million copies (6× Multi-Platinum) in the United States.

"The Light in Your Eyes" was originally slated to be the A-side of Rimes's first single, for which she also filmed her first video. A clip of the originally-intended B-side "Blue" was only included as a ten-second tag on the promo record sent to radio stations, but when DJs responded more favorably to "Blue", the A and B sides were reversed and it became her first single instead. Since its release the song has been considered one of Rimes' signature songs.[10]

Rimes re-recorded the song for her new album, Lady & Gentlemen, which was released on September 27, 2011. The song is credited with Time Jumpers and is produced by Darrell Brown and Rimes herself.[11] On May 21, 2018 Rimes released a re-imagined version of the song.[12]

Shawn Haney of Allmusic stated the song was a "sleeper hit," a "radio-friendly airplay single" and that it should "affect listeners in a charismatic and lighthearted way."[13]

The music video featured Rimes sitting by a pool in the summer with sunglasses on, while young boys pass her by.[15] Filmed in Austin, Texas, the music video was directed by Chris Rogers and produced by Hunter Hodge for Pecos Films.[16]

Blue, oh, so lonesome for you
Why can't you be blue over me?

Blue, oh, so lonesome for you
Tears fill my eyes till I can't see

3 o' clock in the morning, here am I
Sitting here so lonely, so lonesome, I could cry

Blue, oh, so lonesome for you
Why can't you be blue over me?

Now that it's over, I've realized
Those weak words you whispered were nothing but lies 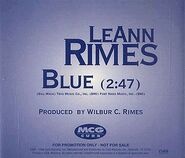 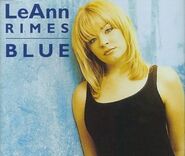 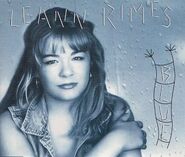 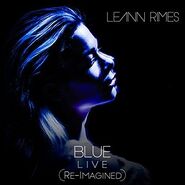 Re-Imagined single cover
Add a photo to this gallery

Retrieved from "https://leann-rimes.fandom.com/wiki/Blue_(single)?oldid=8166"
Community content is available under CC-BY-SA unless otherwise noted.