Dance Like You Don't Give A.... Greatest Hits Remixes is the third greatest hits album by American country music artist LeAnn Rimes and her second remix album. It was originally intended to have a June 2014[1] release but was postponed to August 5, 2014, where it was released via digital download by Curb Records.[2][3] It was also released exclusively at Walmart stores for a limited time packaged together with her Greatest Hits album.[4] The album consists of remixes of songs from Rimes' albums released between 2007 and 2013 (Family, Lady & Gentlemen and Spitfire) and some previous unreleased remixes of prior hits as well as a remixes of two songs released on Whatever We Wanna. The album also consists of Rimes' song "Grace" which was previously released on The Cyrstal Method's eponymous album.

In an interview with Country Weekly Rimes stated: "Everyone knows I love to dance. What better way to celebrate the next chapter of my music than to remix some of my favorite hits from over the years to get my fans out on the dance floor shaking their asses."[5] The album consists of remixes of Rimes' Top 20 Hot 100 singles as well as newer remixes of older hits. For the remixes to "Crazy Women" and "Spitfire", Rimes went back into the studio to record new vocals for the songs.[6]

The album debuted at number sixteen on the Billboard Dance/Electronic Albums, becoming Rimes' first album to ever enter the chart. However, due to the CD set released exclusively at Walmart containing Rimes' previously released Greatest Hits album the sales for that set, 2,000 units, were ineligible to be included with the stand alone album and as such charted at number nineteen, three spots below it, on the Dance/Electronic Albums chart.[6] The album peaked at number fifty on the Billboard Top Country Albums chart.[7]

Additional credits for Dance Like You Don't Give A.... Greatest Hits Remixes adapted from liner notes.[8] 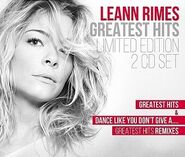 Retrieved from "https://leann-rimes.fandom.com/wiki/Dance_Like_You_Don%27t_Give_A...._Greatest_Hits_Remixes?oldid=8331"
Community content is available under CC-BY-SA unless otherwise noted.