Family is the first album in Rimes' career where she has co-written every song for an album.

The album debuted at number four on the US Billboard 200 chart, selling 74,200 copies in its first week. Upon its release, Family received positive reviews from most music critics, who complimented Rimes' performance and songwriting. It earned her a Grammy Award nomination for Best Female Country Vocal Performance, for the album's lead single "Nothin' Better to Do".

"Nothin' Better to Do" and the title track were used in the movie Good Intentions.[1]

The album debuted at number four on the US Billboard 200 chart, with first-week sales of 74,200 copies in the United States.[3] It spent a total of twenty weeks on the Billboard 200.

In the United Kingdom, Family debuted at number thirty-one on the UK Albums Chart, becoming Rimes's first album to miss the top twenty of the chart (though not all of her albums were released in the UK).

Family received positive reviews from most music critics.[4] At Metacritic, which assigns a normalized rating out of a hundred to reviews from mainstream critics, the album received an average score of seventy, based on twelve reviews, which indicates "generally favorable reviews".[4] Allmusic editor Stephen Thomas Erlewine gave it four out of five stars and called it "surprisingly far-ranging underneath its soft country-pop veneer [...] a canny blend of the commercial and the confessional".[5] Blender's Jane Dark complimented its "lighthearted genre-hopping", writing that it "suggests nothing so much as a Broadway smash about a restless country star, borrowing from many styles, beholden to none."[6] Sarah Rodman of The Boston Globe praised Rimes' songwriting and dubbed Family "the best, most cogent album of her career".[7] Kelefa Sanneh of The New York Times complimented her "gentle belting-out" and commented that "the music echoes the fearlessness in the lyrics".[8] Slant Magazine's Jonathan Keefe called Rimes "a distinctive interpretive singer" and viewed that her songwriting gives the album "the kind of focus and thematic coherence that most Nashville acts can't be bothered with".[9] Keefe cited Family as "among the strongest mainstream country albums of the past several years".[9] Ken Tucker of Billboard gave the album a favorable review and said, "It took personal experience for LeAnn Rimes to get to the point where she could write, record and release Family, the sum of a so-far extraordinary but still young life. But just because it's a personal album doesn't mean it doesn't speak to the masses."[10]

However, Q gave the album two out of five stars and stated "There's little spark, despite her admirable willingness to take chances."[4] Entertainment Weekly's Alanna Nash gave it a B rating and commented that "Rimes displays new maturity in songwriting [...] though too often she lapses into posturing power pop".[11] Adam Sweeting of Uncut criticized its music, writing that the songs "sound like an update of the kind of AOR racket Pat Benatar and Heart were making in the '80s".[12] Dave Simpson of The Guardian noted "A slightly too-smooth production and typically overblown Bon Jovi collaboration", but called it "an album full of swaggering rhythm'n'booze and emotional confessionals that explore a dysfunctional childhood".[13] Despite finding the song "uneven", Rolling Stone writer Rob Sheffield gave the album three-and-a-half out of five stars and cited "Nothin' Better to Do", "Family", and "Till We Ain't Strangers Anymore" as highlights.[14] Thomas Kintner of The Hartford Courant called Family "a carefully manicured, but still lively assortment that highlights her substantial vocal strengths", and praised Rimes' singing, stating "She is prone to embracing tunes so disposable that they should be beneath her notice, but the melodic richness she showers on even the most lackluster lyrics makes for interesting listening".[15]

Credits for Family adapted from Allmusic.[17] 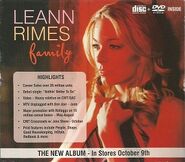 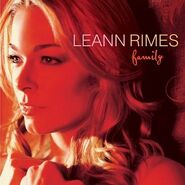 Australian cover
Add a photo to this gallery

Retrieved from "https://leann-rimes.fandom.com/wiki/Family?oldid=7184"
Community content is available under CC-BY-SA unless otherwise noted.