God Bless America is the second compilation album from American recording artist LeAnn Rimes. The album was released on October 16, 2001. The album comprises patriotic and inspirational songs that were originally recorded on her You Light Up My Life: Inspirational Songs album (tracks one, two, eight and ten), as well as songs from her commercial album, All That (tracks five, seven and nine), under the independent label, Nor Va Jak, although "Why Can't We" and "Middle Man" are both re-recordings. "Put a Little Holiday in Your Heart" was originally released as a bonus single, with the song "Unchained Melody", alongside Blue at Target during the 1996 Christmas season.[1] The only two new songs that were released on the album were "The Lord's Prayer" and "The Sands of Time". The album was released as a patriotic tribute to the events of September 11, 2001, with the liner stating "These classic recordings were made while America was first discovering LeAnn Rimes."[2][3] 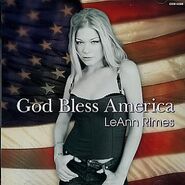 Japanese cover
Add a photo to this gallery

Retrieved from "https://leann-rimes.fandom.com/wiki/God_Bless_America_(album)?oldid=8029"
Community content is available under CC-BY-SA unless otherwise noted.