Lady & Gentlemen is the tenth studio album by American country music recording artist LeAnn Rimes. The album is Rimes' second cover album (the first being her self-titled album.) The only new songs on the album are the two bonus tracks, "Crazy Women" and "Give". It was released on September 27, 2011 by Curb Records. Rimes co-produced the album with country singer, Vince Gill, and Darrell Brown, with whom she collaborated on her 2007 album Family. A vinyl record of the album was released on the same day.

Lady & Gentlemen consists of Rimes covering songs by male country artist, including Vince Gill, who helped produce the album, Merle Haggard, Kris Kristofferson, and Waylon Jennings. Rimes also "revisited" her 1996 debut single, "Blue" on the album, which she picked up the tempo on.[1] The album was released on September 27, 2011 by Curb Records.[2] A vinyl record of the album was released on the same day.[3] Rimes co-produced the album with country singer, Vince Gill, and Darrell Brown,[4] of whom she collaborated with on her 2007 album Family.[5]

Lady & Gentleman received mostly positive reviews from most music critics. So far it has been given a score of seventy-five out of a hundred from Metacritic.[9] Allmusic editor Stephen Thomas Erlewine gave it three-in-a-half out of five stars and called it "a collection of masculine country classics reinterpreted by a female singer."[10] Mikael Wood of Entertainment Weekly stated that the album "rarely sheds new light on the top-shelf material."[11] Jonathan Keefe of Slant Magazine compared the album to Tanya Tucker's 2009 album, My Turn and stated that album finds Rimes "taking real risks and making better music than many of her contemporaries."[12] Randy Lewis of the Los Angeles Times claimed that Rimes "has been contending lately with flak from image-conscious types over paparazzi photos of her slimmed-down physique, but her leaner, meaner approach to a batch of classic country songs for her latest collection is mostly good news."[1] Ben Ratliff of The New York Times stated that Rimes "can finally ease up on her default vocal style, brassy and belting, which is of course its own gender role."[13] 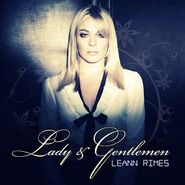 Alternate cover
Add a photo to this gallery

Retrieved from "https://leann-rimes.fandom.com/wiki/Lady_%26_Gentlemen?oldid=6686"
Community content is available under CC-BY-SA unless otherwise noted.