The Best of LeAnn Rimes: Remixed is a greatest hits album of remixes by American country singer LeAnn Rimes, released in June of 2004 outside the US.[1][2] The album peaked at number ninety on the Swiss Albums Chart. It is also the counter part to The Best of LeAnn Rimes. Just over ten years after the release Rimes would release another greatest hits remix album, this time in the US called Dance Like You Don't Give A.... Greatest Hits Remixes (2014). 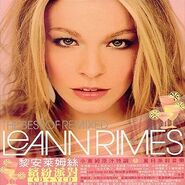 Asian cover
Add a photo to this gallery

Retrieved from "https://leann-rimes.fandom.com/wiki/The_Best_of_LeAnn_Rimes:_Remixed?oldid=7120"
Community content is available under CC-BY-SA unless otherwise noted.