Unchained Melody: The Early Years or simply The Early Years[1][2][3][4], and sometimes refered to as Unchained Melody, is a compilation album by American country singer LeAnn Rimes, released in the United States on February 11, 1997 by Curb Records. Due to high sales of her debut album, Blue, the album consists of tracks recorded previously to Blue, tracks one, two and five through nine were taken from Rimes' independent album, under Nor Va Jak label, All That (1994). "Unchained Melody" (originally by The Righteous Brothers) was released on a single as a B-side track with "Put a Little Holiday in Your Heart" at Target stores during the 1996 Christmas season alongside Rimes' debut album. The album contains cover versions of "I Want to Be a Cowboy's Sweetheart" by Patsy Montana, "Blue Moon of Kentucky" by Bill Monroe, "I Will Always Love You" by Dolly Parton, "Yesterday" by The Beatles. The album has been certified 2× Platinum for shipments of two million copies in the United States.

Due to high sales of Rimes' debut album, Blue,[5] Curb Records used several tracks recorded from Rimes' commercial album, All That,[6][7] all of which were recorded when Rimes was eleven years old.[8][7] The only songs not recorded prior to Blue is Rimes' cover of Bill Monroe's "Blue Moon of Kentucky" and the song "River of Love". "Unchained Melody" was originally released on a single as a B-side track with "Put a Little Holiday in Your Heart" at Target stores during the 1996 Christmas season alongside Rimes' debut album,[9][10] and as a B-side track to "One Way Ticket (Because I Can)". The compilation album was released on February 11, 1997 by Curb Records.[11]

Jose F. Promis of Allmusic gave the album two and a half out of five stars stating that it's "a tad bizarre" due to the album consisting of recordings released prior to Blue, that were recorded when Rimes was eleven years old, as a follow up to her debut album.[12] 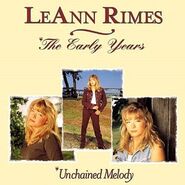 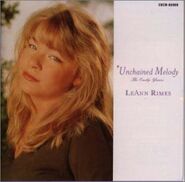 Japanese cover
Add a photo to this gallery

Retrieved from "https://leann-rimes.fandom.com/wiki/Unchained_Melody:_The_Early_Years?oldid=6694"
Community content is available under CC-BY-SA unless otherwise noted.