Whatever We Wanna is the eighth studio album by LeAnn Rimes, released June 6, 2006. The album is similar to her R&B influenced Twisted Angel but has a more rock-oriented sound. The album was released exclusively in Europe. It was originally slated to be released in the U.S., however, it was not released due to the success of her single (from This Woman), "Something's Gotta Give" (which peaked at number two on Billboard’s Top Country Songs), leading to an increase in sales of This Woman.

Credits for Whatever We Wanna were adapted from liner notes.[5] 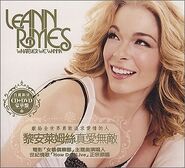 Taiwan cover
Add a photo to this gallery

Retrieved from "https://leann-rimes.fandom.com/wiki/Whatever_We_Wanna?oldid=8307"
Community content is available under CC-BY-SA unless otherwise noted.